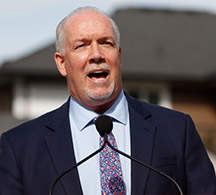 The Asian Star: The BC Liberal government had promised a new hospital for Surrey back in 2013. The hospital was never built, in fact, the land it was to be built was sold to a developer. Now your government has announced that a new hospital will be built in Cloverdale. Surrey residents are skeptic that this promise will be kept. What do you say to the residents of Surrey?

I am delighted to say, unequivocally, and categorically that it will be built, and it will be a new hospital with a cancer unit attached to it. I can’t believe the BC Liberals continue to try get in the way of progress we want to bring to the community. As I said in the debate, the leader of the BC Liberal party, who is now saying he is the only one that can be trusted to build the hospital, sold the land that the NDP purchased to build the second hospital. It’s outrageous, its disappointing, but I have 100% confidence, the business plan is near completion, the architects been engaged, the work is underway, and again I want to re enforce a second hospital will be built, it will have a cancer clinic attached to it.

We are also putting in a new medical centre in Surrey so we can continue to grow local doctors and local health care providers.

The Asian Star: A new tunnel proposal versus the 10-lane bridge proposal. Why the flip flop on this? The on-going traffic gridlock is grating on drivers stuck in idle. What do you have to say to their concerns?

We are in the final stages of the business plan, we need to work with the Department of Fisheries and Oceans, salmon issues in the Fraser are of course critical to all of us. And we want to make sure the Tsawwassen First Nation, which has rights and final and title in the area, have a clear understanding of what we want to do. Our plan is to put in a second tunnel, it’s supported by Mayors Council across the region. The bridge proposal by the BC Liberals was not supported by the Mayors Council except for Delta. Now Mayor Harvie, who is very thoughtful and focused on making sure his community can grow and prosper, supports the initiative we have. I was hopeful that we would have been to make an announcement now, but I don’t want to prejudge the business which is in its final stages. That’s why we have put in an additional 9 billion dollars into our capital budget, which was already the biggest budget in BC history, 9 more billion on top of that will allow us to extend the skytrain to Langley, allow us to address the Massey crossing issue. The money is available, the plan is almost complete.

I think the Liberals going backwards and now saying, ‘remember that bridge that nobody wanted and that we were going to toll? We will build the bridge and now we won’t put tolls on it’. The Mayor of Richmond was lighting fast in coming out and condemning that initiative from the BC liberals because its inconsistent with the growth in the area.

The Asia Star: BC Liberal party has announced they want to end ICBC monopoly and bring in private insurance companies. What is your response to this?

I am always curious as to why the party that used ICBC like a bank machine for their needs, taking money out of ICBC, and driving up rates for people, will then offer up their solutions. ICBC was hemorrhaging money that went to our bottom line and our budget but despite that we balanced three successive budgets and were continuing to go that way until the pandemic hit and not just BC and Canada, but indeed the world’s fiscal situation got turned upside down. But we were making and are continuing to make changes to ICBC that will see significant reductions next year in fees, up to 20% which translates to about $400 dollars per person.

To have Mr. Wilkinson and the BC Liberals arrive late to the party is good news but they had 16 years to bring forward these changes, but they chose not to. Private auto insurance is okay for those that can pay for but for those who can’t we have to make sure that everyone is covered. We believe the changes we made at ICBC will, first of all keep cost down for drivers and make sure, certainly in the case of catastrophic injury, there will be more resources available to people to get them through those challenges. I think ICBC needed to be rebooted, not discarded, and I think we are well on the way and it taken a long time. Certainly, in the beginning of the new year people are going to start seeing, when their renewals are coming, to see the savings they are going to make because of the extended care model that David Eby and our team has put together.

We have been focused on affordability since we came into government, that means lifting wages, that means business can succeed and be profitable, but we also have to make sure that workers have dollars in their pockets and are full participants in the economy. We are committed to the people of Surrey and BC.