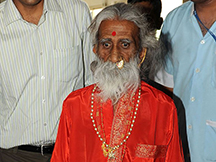 An Indian yogi whose claims he spent decades without food or water earned him a band of devotees and the scepticism of doctors died on Tuesday, his neighbour said.

The long-haired and bearded Prahlad Jani – who dressed in red and wore a nose ring – hailed from Charada village in the western state of Gujarat, where he spent his life in a routine of yoga and mediation.

“He died early Tuesday morning at his residence due to old age,” Sheetal Chaudhary, who lived next door to Jani, said.

“He was rushed to hospital after midnight, but was declared dead on arrival by the doctors there.”