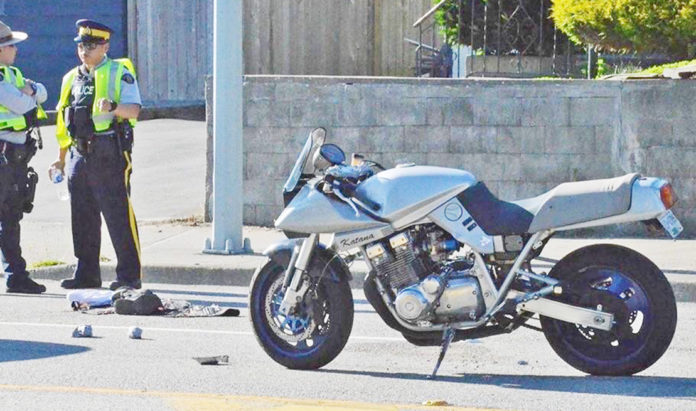 A portion of 16th Avenue was closed by Surrey RCMP last week as a motorcycle crashed near 148 Street intersection.

A motorcyclist is in critical condition after his motorcycle crashed in South Surrey near White Rock and Surrey border not expected to survive his injuries.

A family member close to the 56-year-old man told media that he received a brain injury and if he were to wake up, doctors said he would be in a vegetative state.

“He would not want that. I am finding it hard to let him go, but as he is an organ donor, he has to be taken off the ventilator or his body will eventually shut down and the organs no longer be viable,” the family member wrote to PAN.

Surrey RCMP Cpl. Scotty Schumann said the man was travelling on 16 Avenue (North Bluff Road) when he rear-ended a vehicle near the 148 Street (Oxford Street) intersection just before 5 p.m. on July 5.

An air ambulance was called to the scene, the man was transported to Royal Columbian Hospital.

According to a witness, police, paramedics and firefighters found the motorcycle rider unconscious and unresponsive. A second vehicle was stopped at the scene but did not have visible damage.

Schumann said RCMP conducted an accident reconstruction of the scene and the investigation is ongoing.

The family member said they “feel there is more to this than what we have been told and the family needs closure.”