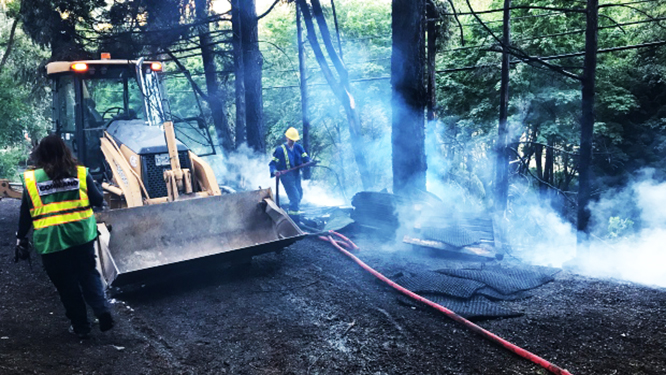 Highway closed between Sooke and Langford for several hours

A wildfire in Victoria area in the Island was contained within a few hours on Wednesday, but not before it forced evacuations and destroyed one home.

The small house along Sooke Road in Metchosin, west of the city, was damaged by flames and water as crews fought to get the fast-moving brush fire under control.

Highway 14 was also closed for several hours. Fire officials say no people or animals were hurt.

Fire crews were called to the blaze near Kangaroo Road at around 3:30 p.m. PT.

Courtenay Wilson says he witnessed the start of the fire and directed traffic as it began.

“I come around the corner and all of a sudden I’m just seeing smoke going across the highway,” Wilson said.

“As soon as I get right up to it, a cop car pulls up, and then I’m looking ahead, and now there’s flames all across the side of the road.

“When I got there, the fire was just starting, but you could feel the heat. The fire was only about 10 feet away from me.”

Langford Fire Chief Chris Aubrey says one man was home at the time and had to be removed from the destroyed house when his efforts to fight the fire were unsuccessful.

He says the fire was challenging because of the steep terrain and dense brush where it was sparked. A total of 31 firefighters and a helicopter were deployed against it.