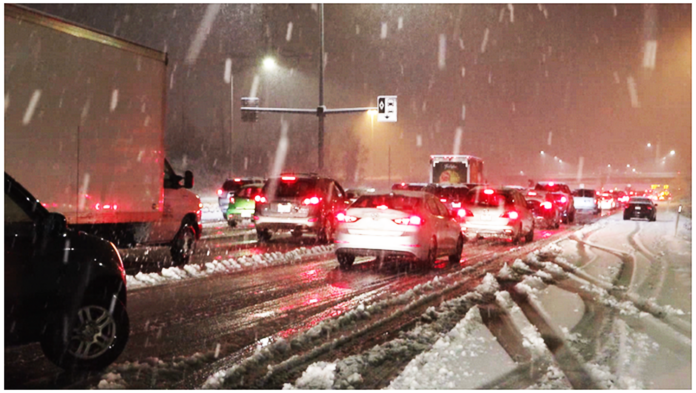 Metro Vancouver and parts of BC’s South Coast hit by snowstorm on Tuesday afternoon Most parts of Metro Vancouver, including Surrey, Delta, Vancouver, Burnaby, Coquitlam, and North Vancouver were affected by the snow.
Metro Vancouver & Fraser Valley are dealing with aftermath of snowstorm that dumped up to 20 cm of snow on the ground.
While Environment Canada has lifted the snowfall warning for Metro Vancouver, the weather warning remains in effect for the Fraser Valley.
Abbotsford, Chilliwack, and Hope are set to receive more snow into the day.
Across the region, brace for delays and difficult driving conditions with snow, slush and icy patches on the ground.
Snow expected to taper off or switch to rain Wednesday morning; slippery roads, poor visibility possible
Weather Network meteorologist says Wednesday morning will be “an absolute mess”.
Alex Fraser Bridge re-opened after overnight closure, strands motorists.
The Bridge was closed after crashes and snarled vehicles in both directions for several hours, stranding some commuters overnight.
The northbound left and right lanes re-opened around 11 p.m., and DriveBC reported the southbound lanes reopened around 3 a.m. on Wednesday.
Many people reported being stuck in their vehicles on the bridge for hours.
Commuters were trapped in cars and buses for hours on end Tuesday night as snowy conditions wreaked havoc on highways and bridges across B.C.’s Lower Mainland.
A series of crashes snarled traffic throughout the region, closing the Alex Fraser Bridge in both directions and causing major delays on the Lions Gate Bridge and around the George Massey Tunnel.
Semi trucks stalled and jackknifed on the Pattullo Bridge and the Queensborough Bridge as well, blocking lanes of traffic and contributing to a commuter nightmare that, for some, dragged on for upwards of eight hours.
Among them was Rajveer Kaur Bhatti, who decided to bus to work at Kwantlen Polytechnic University’s Richmond campus on Tuesday after seeing there was snow in the forecast. She spent seven hours stuck on bus on Tuesday evening, and didn’t even make it halfway home to Surrey. The driver eventually told passengers they could step outside and walk to the nearby Nanaskar Gurdwara Gursikh Temple still in Richmond for shelter.
“That was the option he provided us, and without any doubt we chose that,” Bhatti said,“ They provided us with hot drinks. They provided us with phone chargers so that we can connect our phones and inform our parents, inform our families.”
When she arrived, Bhatti said there were hundreds of other people already taking refuge from the cold , and some others sleeping in their vehicles in the parking lot.
Road conditions were so poor and the delays were so long, some drivers described their commute as the worst they have ever experienced in the region.
Forecasters had issued a series of warnings earlier in the day, anticipating up to 20 centimetres of snowfall in parts of Metro Vancouver and the Fraser Valley for the first major winter weather event of the season.
The traffic chaos that ensued was the result of a number of cascading issues, according to Mainroad Lower Mainland Contractors, the company responsible for salting and plowing highways and bridges across the region.
“Cars are sitting there idling and it’s melting snow and then (it’s) refreezing,” general manager Darren Ell told CTV News. “Then more and more people start spinning out because they’re uncomfortable with driving or their vehicles aren’t prepared for the conditions, so it just creates bad on bad.”
There were upwards of 40 plowing vehicles out on Tuesday, according to the company, but many drivers found themselves trapped in the same congestion as commuters. Ell suggested more people should have stayed home or delayed their drive to help prevent the issues that dragged into the early morning hours on Wednesday.
“People knew the storm was coming,” he said. “But they all seemed to leave work at the same time, creating that congestion, creating that early rush hour and that just created the gridlock for us – we just couldn’t’ get through that traffic.”.
More than 30,000 people on B.C.’s South Coast were without power while a bridge connecting parts of Metro Vancouver was closed Tuesday night as snow continued to hit the region.

B.C. Hydro issued a notice advising residents on Hornby Island and Denman Island to prepare to be without power until Wednesday morning, as ferry cancellations means crews cannot get over to make repairs.
“We plan to have crews take the first available ferry in the morning,” B.C. Hydro says on its website.
In an interview with CBC, spokesperson Mora Scott said most of the outages seem to be due to snow weighing down trees, and ultimately, taking out power lines.
The Alex Fraser Bridge in Metro Vancouver was also closed Tuesday night following a number of crashes.
A northbound lane opened later in the evening while southbound remained closed, DriveBC said, adding that motorists should expect delays in the area and consider alternate routes.