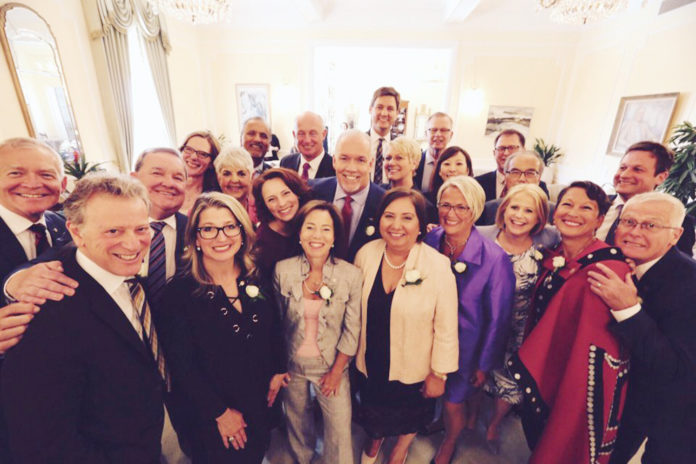 John Horgan becomes 36th premier of British Columbia, and names his cabinet as new NDP government sworn into the office on Tuesday, July 18, 2017.

After a historic provincial election that took nearly two months to resolve, the BC NDP has officially taken power.

John Horgan has been sworn in as British Columbia’s 36th premier, along with his cabinet.

Horgan, 57, replaces Christy Clark as premier and ends 16 years of Liberal rule in BC

​Hundreds of family members and friends of the new NDP cabinet celebrated the change of power at Government House in Victoria this afternoon, as Horgan was sworn in alongside his new cabinet.

“Our government will offer families relief from high costs and fees, strengthen services like health care and education, and create good jobs and economic opportunity across B.C.,” said Horgan in a statement.

‘We’re ready to get started’

The official transition of power takes place after months of political uncertainty in BC Horgan was asked to govern by Lt.-Gov. Judith Guichon after the B.C. Liberals were defeated in a confidence vote.

The gender-balanced cabinet includes a minister of mental health and addictions, fulfilling a key campaign commitment. The minister is Judy Darcy, former health critic and president of the Hospital Employees’ Union.

In his speech after being sworn in, Horgan addressed the tens of thousands of people evacuated from B.C.’s Interior as wildfires rage throughout the region.

“I know that the people of B.C. are resilient and continue to work together … to recover and restore our exceptional bounty and unique diversity for future generations,” he said.

Horgan also spoke about planning to meet with Prime Minister Justin Trudeau to discuss the opioid crisis, reaching a softwood lumber deal, improving the province’s education system and improving equality in BC.

“I will work as hard as I’ve ever worked before to make sure I live up to our commitments made during the election campaign, to ensure … that this great economy works not just for the few, but for everyone. We don’t want to leave anyone behind,” he said.

“We have the team, we have the plan, we are committed to getting it done. You can count on that,” said Horgan, at the end of his remarks.