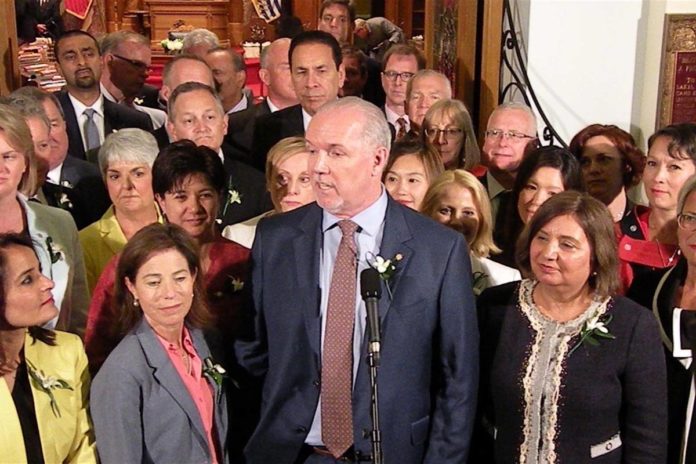 John Horgan surrounded by 41 NDP members at they took oaths of the office as MLAs on June 7.

After more than nine weeks BC’s closest-ever election results, NDP leader John Horgan is set to officially take over as new premier of the province, he and his new cabinet will take their oaths to the office on July 18.

The NDP announced Thursday that the ceremony will take place at Government House in Victoria on Thursday, July 18 at 2 p.m. Lt. Gov. Judith Guichon, who conducted a similar ceremony for the short-lived post-election cabinet of Premier Christy Clark in early June.

“We are excited to deliver on our commitments,” said Victoria-Beacon Hill MLA Carole James, who is expected to get a senior role in the NDP cabinet. “That’s why we’re working as quickly as possible to give British Columbians the new leadership they voted for.”

Horgan has made the first of the many staffing selections that await after 16 years of B.C. Liberal government. Wednesday James, spokesperson for the transition team, announced that former BCIT president Don Wright will take over as deputy minister to the premier and head of the public service.

Horgan has estimated it will take most of the summer for the new cabinet to go through transition documents prepared by each ministry and prepare for a legislature session that is expected in early September.