A gunman opened fire inside a Macy’s store at a mall in Burlington, Washington, north of Seattle, killing five people, authorities said . 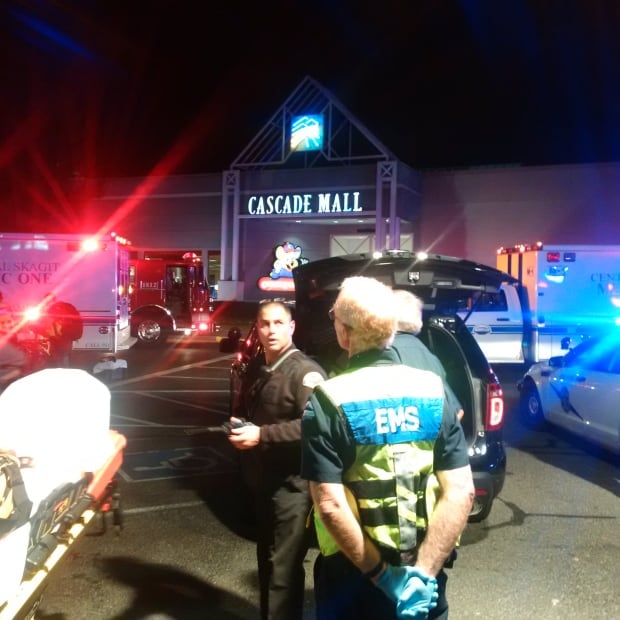 Washington State Patrol posted this photo of EMS personnel entering the Cascade Mall in Burlington, Washington, to attend ‘to attend to injured inside.’

Police said they had recovered the weapon and were looking for a man dressed in black and last seen walking toward Interstate 5. The description, including that he appeared to be Hispanic, was based on statements from witnesses, said Given Kutz, a spokesman for the Skagit County Emergency Operations Center.

“We do not have an identity on the individual yet,” Cammock said. “We could certainly use the community’s help.”

Authorities say the motive was unknown for the shooting in a community about 97 kilometres north of Seattle.

People fled, customers hid in dressing rooms and employees locked the doors of nearby stores after gunshots rang out just after 7 p.m. Friday at the Cascade Mall. A helicopter, search teams and K-9 units scoured the area for a rifle-carrying man.

More than 200 officers responded, and took several hours to clear everyone from the mall as they tried to establish whether the suspect was still on the scene.

“They located numerous employees and shoppers that had sheltered in place inside individual businesses, and they were escorted out of the building,” Tom Moser, assistant police chief with Burlington police department, said during the news conference. They were all taken to a local church, where they were reunited with family members.

“At this time, we have learned that the suspect had already fled the mall prior to officer arrival,” Moser added. “We did not know that throughout the search process.”

The FBI said it was assisting local authorities as dozens of police officers searched for the suspect. The FBI’s Seattle office said on Twitter that it “has no information to suggest additional attacks planned” in Washington state, but did not elaborate. 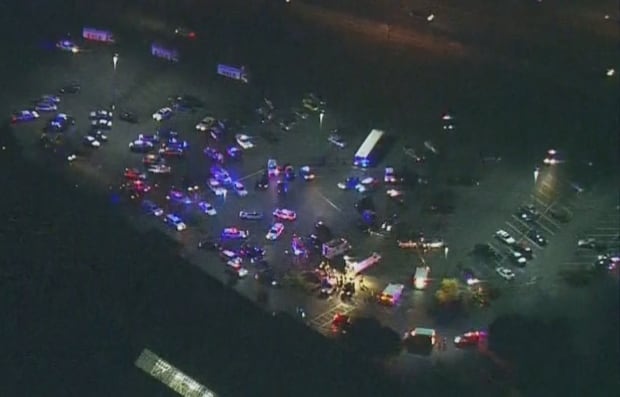 A helicopter image shows a mass of emergency vehicles in the parking lot of the Cascade Mall at approximately 8:30 p.m. PT.

Tari Caswell told the Skagit Valley Herald she was in the Macy’s women’s dressing room when she heard “what sounded like four balloons popping.”

“Then I heard seven or eight more, and I just stayed quiet in the dressing room, because it just didn’t feel right. And it got very quiet. And then I heard a lady yelling for help, and a man came and got me and another lady, and we ran out of the store,” Caswell told the newspaper.

Stephanie Bose, an assistant general manager at Johnny Carino’s Italian restaurant near the Macy’s store at the mall, said she immediately locked the doors to the restaurant after hearing about the shooting from an employee’s boyfriend.

“He was trying to go to the mall and people were screaming,” she told The Associated Press. “It was frantic.”

She said he could see police at the doors with assault rifles and said they were no longer guarding the doors as of 9:30 p.m.

‘This was a senseless act’

The mayor of Burlington was visibly shaken when he spoke at the Saturday morning news conference.

He went on to praise the “tremendous” response from law enforcement.

“And I know that now our support goes with them to help them extend the long arm of the law to bring the son of a bitch to justice who did this to our community.”