Vancouver police have arrested three people in connection with a double homicide in East Vancouver and rescued a person who was kidnapped.  The three men, all in their 20s, were arrested Monday afternoon in a dramatic takedown on East Eighth Avenue near Blair Avenue in New Westminster. Police say they are suspects in the deaths of Samantha Le, 29, and Xuan Vanvy Bacao, 24, who were found dead in their home on Dieppe Place near Dieppe Drive in East Vancouver, September 17.

Charges are being recommended but have not been laid. Police say the connection between the victims and suspect is not being revealed as the investigation is still ongoing.  Acting VPD Sgt. Brian Montague said police became aware of the deaths after responding to a reported abduction. When they arrived at the home, they found the bodies of Le and Bacao, along with an unharmed four-year-old child.

“This investigation went to a point very quickly where there were officers pulled in from all over the Vancouver Police Department,” said Montague.

While police searched in multiple jurisdictions, the investigation centred on New Westminster.

“I can’t underline how dangerous of a situation it was. We’re dealing with armed people, who have potentially committed murders, who have a kidnapping in their vehicle, and we had to act very quickly,” said Montague. 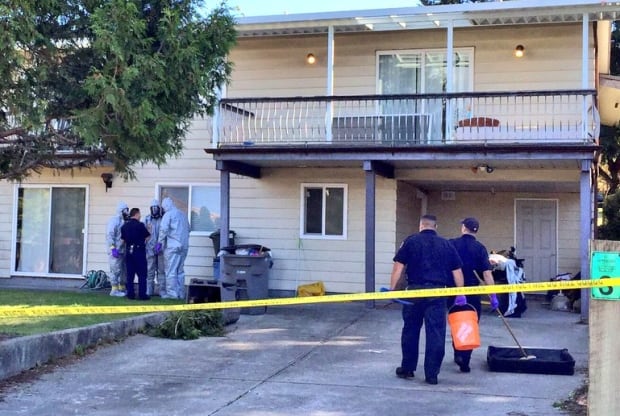 The the house where two bodies were discovered Saturday evening.

At least eight VPD officers conducted a painstaking search of yards, flower beds and porches in the Blair Street neighbourhood of New Westminster, where the suspects were arrested after a dramatic chase Monday afternoon.

A woman who lives on the street but who did not want to be identified told CBC News she heard a loud series of bangs right before she saw a man taken into custody.

“When I finally got enough courage to come outside, I saw a police dog dragging a man down the little grassy hill. There were people running all over the place.”