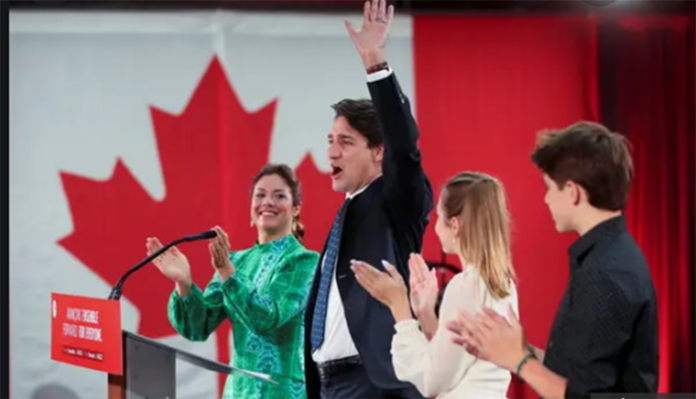 Justin Trudeau wins a minority govt need to work with the other political parties. The results are very similar to the elections in 2019.

What is a minority government?

When one party wins more than half of the 338 ridings (or electoral districts) in the country — at least 170 seats — the leader of that party wins a majority.

But if all of the parties fall short of the halfway mark, things get more complicated.

In that case, the party with the most seats (in this case, the Liberals) will need other parties to agree with their ideas and policies if they want laws to be passed and to remain in power.

They called this election in the hopes of winning a majority, but that didn’t happen.

Watch this video:Trudeau pledges to work with other parties

In his victory speech, Trudeau said he would put the election behind him and get to work.

“You are sending us back to work with a clear mandate to get Canada through this pandemic and the brighter days ahead,” Trudeau said from his home riding in Montreal, Quebec.

Trudeau’s platform included a plan for more affordable housing, $10 a day daycare across the country and a more ambitious climate change plan.

O’Toole, who ran in his first campaign as leader of the Conservatives, didn’t win as many seats as he had hoped, despite his attempts to win over voters who were fed up with Trudeau after six years in power.Conservative Leader Erin O’Toole, salutes the crowd in Oshawa, Ontario, along with his wife, Rebecca, and his kids Molly and Jack. (Image credit: Adrian Wyld/The Canadian Press)

“Tonight, Canadians did not give Mr. Trudeau the majority mandate he wanted,” O’Toole said from his home riding in Oshawa, Ontario.

“In fact, Canadians sent him back with another minority at the cost of $600 million and deeper divisions in our great country.”

Juliette Colbourne, 12, campaigned for the NDP in her hometown of Corner Brook, Newfoundland.She had similar concerns about the cost of the election, given that the results are very similar to the previous election in 2019.

“I think it was a bit disappointing because an election is very expensive with barely any change,” she told CBC Kids News on Tuesday morning.

But overall, she was happy with the results for the NDP, led by Jagmeet Singh, after the party was on track to win two more seats compared to last time.Canadians re-elected a Liberal government on Monday.