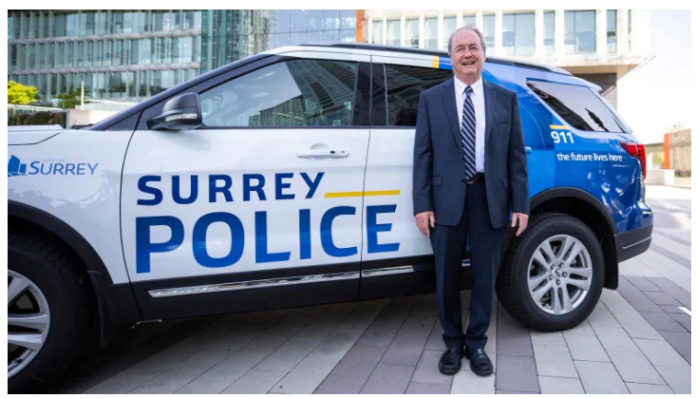 As the City of Surrey prepares to transition from the RCMP to a municipal force, the province has named seven people to sit on the city’s first municipal police board.

The new police board members join Mayor Doug McCallum, as well as Bob Rolls, a retired Vancouver police deputy chief constable who was previously appointed by Surrey city council to complete the nine-person board.

“Today’s milestone is an important one,” McCallum said at a news conference Monday afternoon.

“With the Surrey Police Board now in place, we can start in earnest the critical work ahead that will set the foundation for a new, innovative, modern and proactive police service that is tailor made for Surrey.”

The province said in a statement it chose the new members “following an extensive assessment and screening process” that aimed to balance skills and attributes, as well as reflect the diversity of Surrey.

The police board will provide financial oversight to the department, help establish policies and manage complaints against the department.

Board members will serve for an initial 12- to 18-month term.

Surrey city council voted unanimously in 2018 to end its contract with the RCMP and transition to a municipal force.

The city has previously estimated the transition will cost $19 million. McCallum, who campaigned and won on the plan to replace the RCMP with a municipal force, has pledged to have Surrey Police Department patrols begin in April 2021.

McCallum also took a moment to recognize all the members of the Surrey RCMP.

“I want to sincerely thank all the RCMP members who serve in our city and who have helped to build what was once a farming community into the metropolitan area that Surrey is today,” he said.