Kim Kardashian West has been robbed at gunpoint in a private residence in Paris by assailants disguised as police who made off with millions of pounds worth of jewellery.

A spokeswoman for the reality TV star said she was “badly shaken but physically unharmed” after they tied her up in the flat’s bathroom before fleeing the scene. 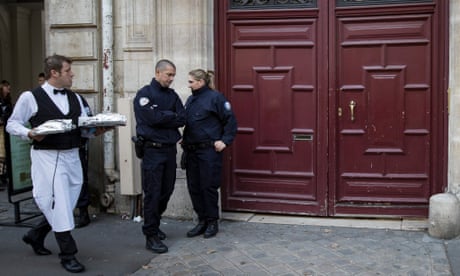 A Paris police official told the Associated Press that five armed men, who were still at large, stole a jewellery box containing valuables worth €6m (£5.2m) as well as a ring worth €4m, and mobile telephones. Police said the robbers escaped on bicycles.

French media reported that the men, who had masks and were wearing fake police armbands, arrived at about 3am on Monday and threatened the concierge at the building in rue Tronchet, near the Madeleine church and not far from the Elysée Palace, the British embassy and the designer shops of rue du Faubourg-Saint Honoré.

The robbers handcuffed the concierge before ordering him to show them where Kardashian West was staying. After forcing their way into the apartment they tied her up and locked her in the bathroom.

“The haul amounts to several million euros, most of which is jewellery. We’re still trying to establish the exact amount stolen,” a police source told Agence France-Presse. He added that Kardashian West had flown out of France on Monday morning after giving a statement to police.

The 35-year-old had been in Paris since last week for fashion week and had attended the Balenciaga show earlier on Sunday.

The reality star sat in the front row at the Givenchy show, with her sister Kourtney and their mother, Kris Jenner, in a show of support for their sister, Kendall Jenner, who was modelling in the presentation.

The family has been uncharacteristically silent on social media since the report involving Kardashian West.

Her husband, Kanye West, had abruptly ended his performance at the Meadows music and arts festival at Citi Field in New York on Sunday night. He stopped midway through his performance of Heartless, citing a “family emergency”.