Government is considering imposing stricter penalties on distracted drivers as collisions across the province continue to surge.

Minister of Public Safety and Solicitor General Mike Farnworth says the province is keeping a close eye on Ontario, where new penalties have been introduced to reduce collisions — including a $50,000 fine and up to two years jail time aimed at distracted drivers who kill.

“Deaths due to distracted driving are now overtaking those from alcohol-related [collisions],” Farnworth told CBC News.

“You have to enforce the rules that we’ve had, hit people in the pocket book, education campaign, and, in the case of distracted driving that causes death or serious bodily harm, look at what Ontario is doing.”

According to ICBC, one in four deaths on B.C. roads involve distracted driving.

Current penalties in B.C. include a $368 traffic violation ticket that also carries four penalty points for each offence. Repeat offenders can also be slapped with 90-day prohibitions.

“The whole idea here is to deter people — we just don’t want people to pick up their phones and be distracted,” said Doroshenko. “The problem that I see is that we never see the follow-through on enforcement.” 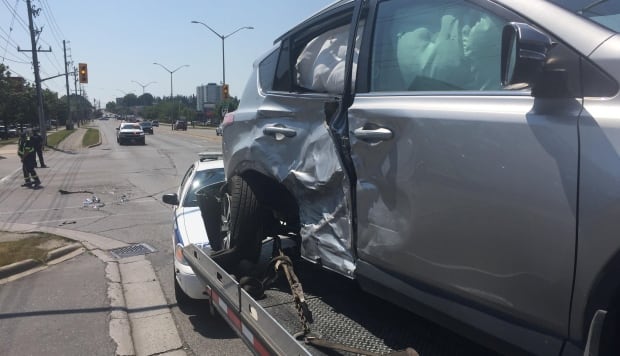 One in four deaths on BC roads involve distracted driving.

He says having more officers on the ground to actively seek out distracted drivers and enforce penalties would prove more effective.

“The governments are great at passing the laws, but not great at giving the police the money they need to enforce the laws.