‘All of a sudden we felt this rocking and creaking noise, and it felt like we were heading down a hill’

SSeveral people have died after an Amtrak train that derailed on a bridge over a busy major highway in Washington State Monday sent part of the train crashing onto Interstate 5, authorities said.   The local sheriff’s offices said several motorists were also injured.

Passengers who spoke to local news stations said they were forced to kick out windows as the train’s emergency doors failed.

“We had just passed the city of DuPont and it seemed like we were going around a curve,” passenger Chris Karnes told local news outlet KIRO 7. 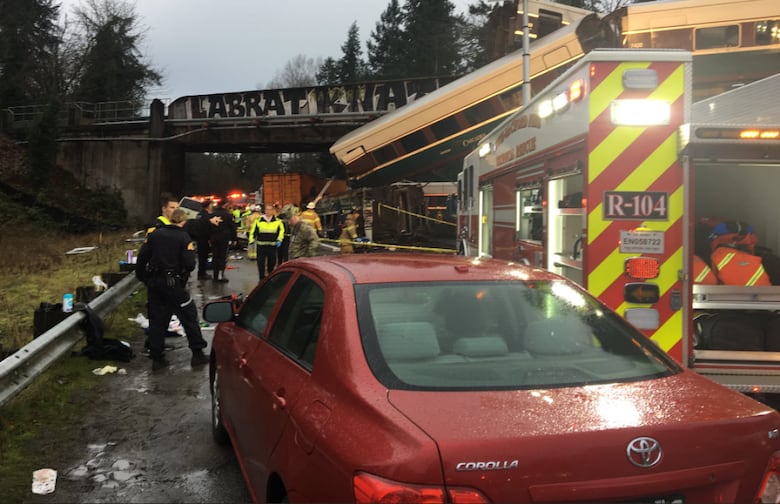 “All of a sudden we felt this rocking and creaking noise, and it felt like we were heading down a hill.”

The derailment occurred on the first day that Amtrak trains began using a new track between the cities of Tacoma and Olympia. Wash., part of a project to reduce travel time, according to state transportation authorities.

The new route takes trains along Interstate 5 —  eliminating a major choke point for passenger trains in Tacoma and allowing trains to reach speeds of 79 miles per hour (127 km per hour), the state’s transportation department said in a  news release in October.

It was not immediately clear whether the derailment, which came during a busy travel time one week before the Christmas holiday, was connected to the new route.

Normally the 13-car train carried up to 250 people.

In an image of the accident posted online it appears the train has fallen off the track onto the I-5 Freeway near Mounts Road in Pierce County in Tacoma, south of Seattle.

Service south of Seattle is temporarily suspended, said Amtrak in a statement.