Six people police had been monitoring as part of an investigation into an ongoing drug feud were arrested on Friday.

“Sometimes during an investigation we become aware of efforts that somebody may have to engage in violence, and we have a responsibility to try to prevent that violence from taking place,” said Assistant Commissioner Bill Fordy, the officer in charge of the Surrey RCMP.

Charges against a fifth man are pending.

A youth, who can’t be named because of his age, is also facing gun charges. 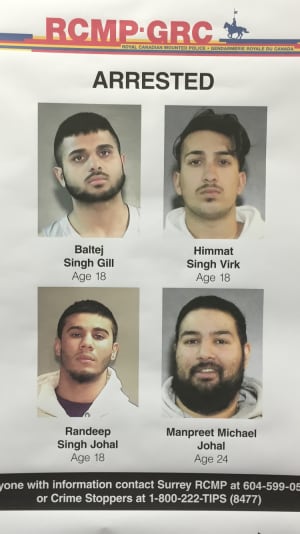 Four of the six men arrested have been charged with conspiracy to commit the indictable offence of reckless discharge of a firearm. (Jesse Johnston/CBC)

Fordy says he believes the accused are linked to a bloody war over drug turf that erupted in Surrey in the spring.

There have been dozens of shootings in Surrey this year and police blame much of the violence on the feud.

A flurry of shootings in March led the RCMP to host community forums and set up a hotline for concerned parents.

Since then, police have made 30 arrests and seized 15 guns.

Thirty-six families have contacted the hotline.

“We’re making significant progress on this file, and I think the residents of Surrey should know that,” said Surrey Mayor Linda Hepner.

Hepner says she’s pleased violent criminals are being taken off the street, but she is frustrated with the criminal justice system.

“I believe any time that you fire a gun in an urban setting, and you mean to harm others, that the severity of the punishment should be significant,” she said. 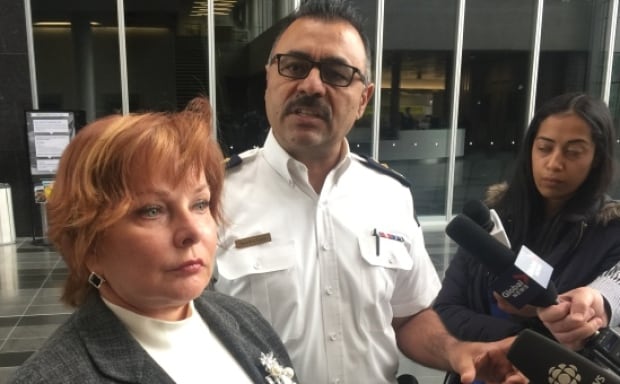 Surrey Mayor Linda Hepner says she’d like to see harsher penalties for anyone convicted of a gun crime. (Jesse Johnston/CBC)

“From the perspective that I have seen up to now, I don’t see that happening.”

“I expect the full weight of the law to come upon these individuals,” Virk said.

“That’s certainly not lost on me, and it’s not lost on [B.C. Solicitor General] Mike Morris in terms of discussions that he is having with his federal counterparts.”