Saren Azer, the Iranian-Canadian father wanted for allegedly abducting his four Canadian children, has been detained by Iranian officials according to his ex-wife.  Alison Azer held a press conference in Ottawa Tuesday calling upon Prime Minister Justin Trudeau to take action by contacting the Iranian President. 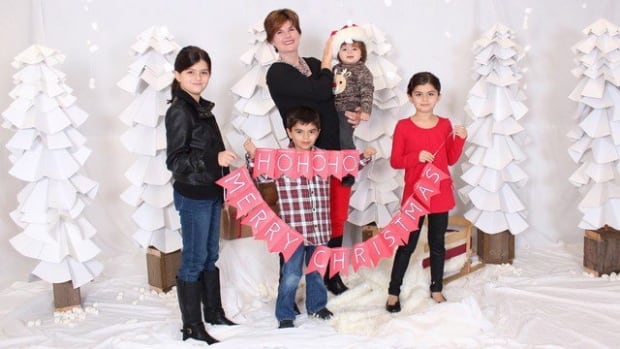 Alison Azer, holds Meitan as her other children Sharvahn, left to right, Dersim and Rojevahn pose for a photo in this family handout image.

“Iran detained the fugitive responsible for the abduction of my Canadian children and Canada has been silent in response,” she said. “The time for leadership is now.”

Alison Azer said the RCMP’s request to speak with Interpol Iran has been blocked by senior Canadian government officials, something that is preventing the case from moving forward.

‘Pick up the phone’

Canada does not have a formal diplomatic relationship with Iran but Alison Azer says that shouldn’t be an issue in this circumstance.

“You don’t need diplomatic relations to pick up the phone,” she told the CBC’s Rick Cluff on the CBC’s The Early Edition. “Countries do it all the time.”

When asked about the Azer case Prime Minister Justin Trudeau responded that “the Azer children are a real preoccupation, not just for Canadians but for our government.”

“We continue to be very closely involved,” he said.

NDP Foreign Affairs critic Hélène Laverdière said the government should be doing everything in its power to bring the children back to Canada.

“We call on the Minister of Global Affairs to respond to these serious allegations and if true, the minister must immediately explain why officials from his department prevented the RCMP from working to secure the return of these four Canadian children,” she said.

According to the group trying to bring the Azer children back to Canada, Saren Azer was detained in the province of West Azerbaijan on June 12. That was after Canada issued an Interpol Red Notice — similar to an international arrest warrant — on four charges of child abduction. Saren Azer is currently out on bail and scheduled to appear in Iranian court in the coming weeks. 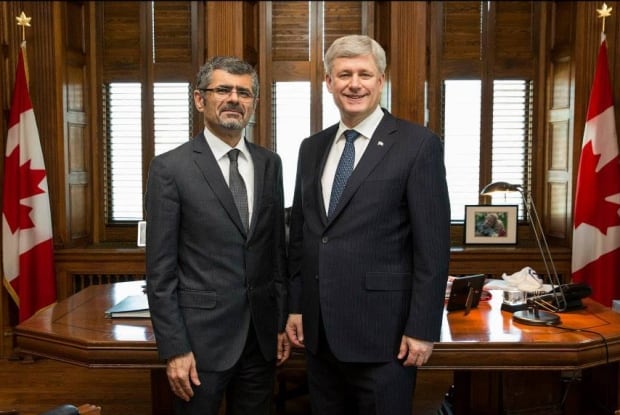 Saren Azer pictured with Stephen Harper in an official photo, after they met to discuss the need for humanitarian aid in Iraq and Syria in 2015.

The children, originally from Comox, B.C. on Vancouver Island, are also in West Azerbaijan according to Alison Azer.

“We’ve been able to weave together information from a variety of sources,” she said. “They’re now in the city of Urmia. I’m not sure who is there with the children and obviously it’s a matter of extreme concern to me.”

Meitan, 4, Dersim, 7, Rojevahn, 10 and Sharvahn,11 are alleged to have been taken to Iraqi Kurdistan by their father while on a court-approved European vacation last summer, before crossing into Iran in February.