And hailing down a cab can get even more challenging during the busy holiday season, when a surge of shoppers, out-of-towners and party-goers are battling for a limited number of taxis.

That’s why a Vancouver city councillor says the council voted to open the door for cab companies to expand their fleet again.

Councillor Geoff Meggs says councillors voted unanimously in favour of allowing cab companies to apply to put additional cabs out on the roads.

“They could add about 10 per cent of their fleet,” said Meggs “I think the number we’re looking at if they all came on would be another 70 cabs or something of that nature.”

But whether Vancouver taxi companies choose to invest in more cabs during the holidays is another question.

Meggs says businesses have to make a tough decision on whether they will recover the costs of funding extra taxis.

“It needs to be over and above their existing fleet, which they’re running full time anyway,” said Meggs.

“Those cars have to be up our regular standards, with the usual safety checks, the qualifications for the drivers to criminal record checks, everything.”

In October, Vancouver extended a moratorium on new taxi licenses until the province completes a review to determine how B.C.s taxi industry can coexist with ride-sharing companies like Uber.

That means there will be no new taxis on Vancouver streets until at least Oct. 2017.

Meggs says that has left some uncertainty in the industry. 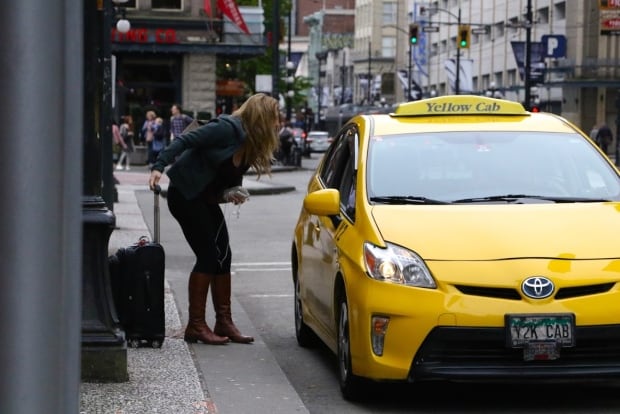 Recently Vancouver extended a moratorium on new taxi licenses until a provincial review on the industry is complete.

“So I can understand why people would be reluctant to make additional investments unless they were sure they were going to break even.”

CBC News contacted the Vancouver Taxi Association and multiple companies, but has not yet heard back.

However, last year, when the city similarly voted to approve some temporary licenses over the holidays, the Vancouver Taxi Association said it was disappointed the city did not approve the 198 licenses it had applied for, as part of a pilot project to better determine the needs of its customers.

“I was shocked at their decision,” Carolyn Bauer with the association said at the time. “It’s not enough taxis…. It’s very disappointing for us.”

Snow in Vancouver: what to know in the days ahead