The Ministry of Transportation is investigating after several people reported smashed windshields while driving over the Alex Fraser and Port Mann bridges today.

“We understand that some drivers have reported a little bit of snow falling on their vehicles,” said Patrick Livolsi, assistant deputy minister in the transportation ministry.

“We are still trying to determine exactly [how many], and that’s why we’d like to talk to anyone who feels they’ve had snow fall on their vehicle.”

It comes as the lower elevations of Metro Vancouver experience their first major snowfall in nearly three years.

Dean Sanders was driving south over over the Alex Fraser Bridge when he heard a deafening crash, as a chunk of ice and snow — about the size of a human head — landed directly on his windshield.

“It was like an explosion happened right in front of my face,” Sanders said.

“I didn’t really see it hit the window, it happened so fast. All of a sudden my window was all shattered in front of me,” he said.

“It was definitely pretty scary. I think it might have come off of one of the concrete supports.” 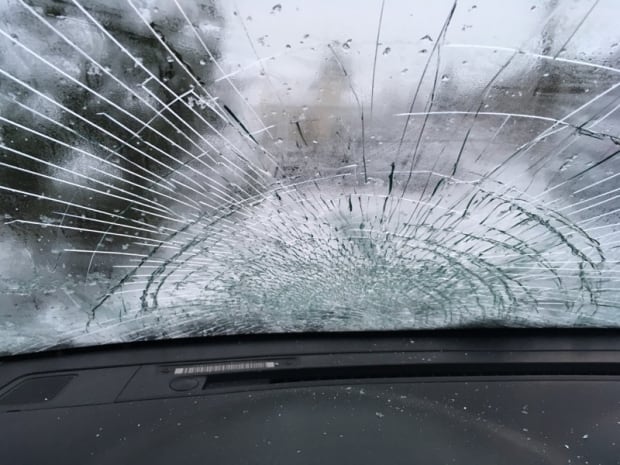 Dean Sanders’ windshield was smashed while driving on the Alex Fraser Bridge on Dec. 5, 2016. (Dean Sanders)

Dave Strobel was travelling east on the Port Mann when the car he was in was hit.

“When we went under the first set of cables, we heard a giant bang … and my friend’s window was completely shattered out,” he said.

“It’s hard to describe. Like a sledgehammer hitting a wall.”

Drive BC is now telling people to expect delays in both directions of the Port Mann due to rolling lane closures.

The situation brings back memories of a significant snowstorm in December 2012, when falling ice from the Port Mann Bridge caused a dangerous shower of ice bombs, forcing it to close and prompting a lawsuit.

Following that incident, the government installed new cable sweepers that could go up and down the cables in regular intervals, preventing the type of ice and snow buildup that caused the accidents.

“We had no way of actually clearing the cables, so the snow accumulated, and when it became too heavy it fell off,” he said.

“With the new system … you would never get any more than a couple centimetres accumulating. You won’t get these mass amounts of snow.”

Regarding the reported incidents on the Alex Fraser Bridge, which does not have cables crossing over lanes, Livolsi speculated that high winds may be playing a factor.

There have been no reports of any injuries.

Man shot during his car wash on busy Scott road