Police are looking for a vehicle they believe to have been involved in an April 4 shooting in Surrey that sent a man to hosptial.

Surrey RCMP are seeking a black Hyundai Tucson SUV they believe was occupied by multiple people when the shooting occurred.

Police still believe the shooting was a targeted incident but now think the person wounded in the shooting was not the suspects’ intended victim, but “the victim of a case of mistaken identity.” 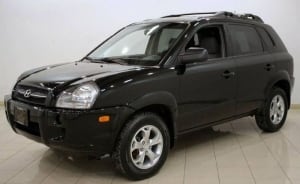 Surrey RCMP are looking for a black Hyundai Tucson similar to the one pictured in this stock photo. (Surrey RCMP)

When it occurred in early April, the shooting was the third in Surrey in as many days.

“We are hoping someone will come forward with more information regarding the suspect vehicle or people associated to it,” Cpl. Scotty Shumann said in a news release.

Anyone with information is asked to contact Surrey RCMP, or Crime Stoppers at 1-800-222-8477 if they prefer to remain anonymous.