Crown lawyers are seeking a special ‘terrorism peace bond’ on a B.C. couple who were convicted of terrorism charges, but freed today by a B.C. Supreme Court judge concerned by police entrapment in the case.

John Nuttall, 41, and Amanda Korody, 32, were released Friday morning, after a B.C. Supreme Court judge entered a stay of proceedings in their terror plot case.

The Victoria pair headed out with family to celebrate their freedom and have lunch at an outdoor café in East Vancouver.

“It was such a relief for them to get out. It was so relaxing,” said Nuttall’s mother, Maureen Smith, who joined them.

After lunch, Smith said they had driven just three blocks when Vancouver police cruisers boxed them in, ordered the group out of the car, and handcuffed Nuttall and Korody. 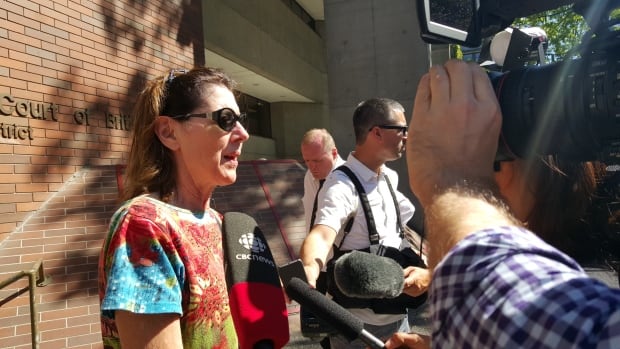 John Nuttall’s mother, Maureen Smith, speaks to reporters outside the courthouse in Vancouver while waiting for her son to be released after he and Amanda Korody were rearrested Friday afternoon.  “Oh, I was just terrified,” said Smith. “I just thought, what the hell? What’s going on? Oh, my God, are they ever going to be free?”  Korody’s lawyer, Mark Jette, called it “very disappointing.” “There was a real lack of courtesy in the way we were dealt with,” he said. Late Friday, Nuttall and Korody were released on bail. They’re scheduled to return to court Sept. 7.

Crown lawyer Peter Eccles said Nuttall and Kordoy were taken into custody as prosecutors sought a peace bond under the ‘fear of terrorism’ section of the Criminal Code. The section was added as part of controversial Bill C-51 brought in by the Harper government. “The purpose of a terrorism peace bond is to prevent or disrupt a specific individual from committing a terrorism offence,” according to a background statement from the federal government.  The bond can be applied with the attorney general’s consent when there are reasonable fears that a person may commit a terrorism offence,

‘The purpose of a terrorism peace bond is to prevent or disrupt a specific individual from committing a terrorism offence.’ – Government of Canada

A court could place bond restrictions on someone for up to a year, or jail them if they don’t agree to abide by the rules. The restriction could include a curfew, electronic monitoring, a firearms ban, or handing over a passport.

Last year, Nuttall and Korody were found guilty by a jury of conspiring to murder persons unknown and making or possessing an explosive substance for planting pressure-cooker bombs outside the B.C. Legislature in 2013. Both were facing a sentence of life in prison.But Friday, B.C. Supreme Court Justice Catherine Bruce entered a stay of proceedings and released them. Defence lawyers had called it a “manufactured crime.”The judge ruled that Nutall and Korody were entrapped by RCMP. She said police went too far and used trickery and subterfuge to manipulate the pair.The judge also said the couple did not have the mental capacity to have planned and carried out the bomb plot themselves.