On Tuesday, May 9, all parties will find out which strategy worked. BC election campaign has been like a 28-day game of chess.

In the face of rising home prices, cost of living going up and growing unaffordability in many regions of the province, Premier Christy Clark has been trying once again to convince the electorate voters things would be worse under the BC NDP.

“I am going for my second term,” said Clark. “We haven’t grown this fast compared to the rest of the country since 1961. B.C. is doing really well.”

BC NDP and Liberals have gone, trying to expose their opponents’ weaknesses, while making sure they protect themselves from getting knocked out. For the BC Liberals, the play has mimicked the campaign of the 2013 election.

NDP counting on change  When the legislature was dissolved in April, the NDP had 35 seats, to the B.C. Liberals’ 47.

When you factor in the new electoral boundaries, it means John Horgan’s party needs to gain 9 seats to get the 44 seats needed to form a majority government.

That’s a lot of change, especially considering the B.C. NDP have only won a provincial election three times in history, making the NDP leader’s path to victory much harder.

“People are yearning for a government that works for them…on health care and education,” said Horgan. “When people look at the B.C. NDP I want them to know this is someone that has their back.” 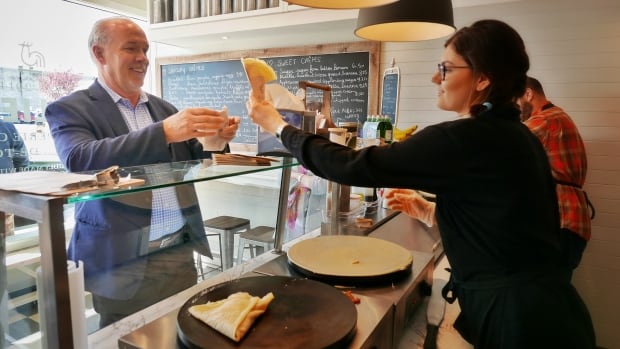 John Horgan ordering a crepe on the campaign trail on May 1, 2017.

Kevin Falcon, who was Clark’s first finance minister before leaving politics, believes the change the NDP is promising can be expensive — especially when it comes to implementing new policies.

“The Liberals have to get across the risk of change. Change for the sake of change can sometimes have unintended consequences.”

One of those consequences, he says, would likely be a tax hike – not just for the province’s most wealthy and for corporations but also for those who make more than $70,000 a year.

But what the NDP is hoping for is voters are inspired by their big ideas that include eliminating bridge tolls, phasing out MSP premiums and bringing in a $10 dollar a day childcare program.

“They need to communicate with people who are wanting change that the best opportunity for change is rallying behind the NDP,” said former NDP communications director and current Vancouver city councillor Geoff Meggs. “That is the only way they are going to get … improvements in affordability and the other things that are making their lives difficult.”

A win for the Greens?

And that means the B.C. NDP’s final strategy is dismantling the Green vote.

Horgan has spent many of the campaign’s final days in strong NDP Vancouver Island ridings to discourage voters from casting a ballot for the Greens.

His best hope is to focus on adding seats in Cowichan Valley, Saanich North and the Islands and then hope the rest of the province is so close that he holds the balance of power in a minority government.

“Neither of those parties should be trusted with a majority,” said Weaver. “Let’s see how many seats they have [in the end]. It’s irresponsible at this point in the election to rule anything out.”

That means there may not actually be a clear victor after Tuesday. It could instead be Weaver controlling the chess board, making a king out of one of the others.

City of Surrey budget passes despite the opposition