An Indian spiritual guru who goes by the name of Dr. Saint Gurmeet Singh Ram Rahim Insan was sentenced on Monday to 20 years in prison for raping two female followers.

An Indian judge sentenced a self-styled “godman” whose followers went on a deadly rampage after he was convicted of rape last week to 20 years in prison on Monday, but a shoot-to-kill order, curfew and heavy police presence kept protesters at bay.

A spokesman for the Central Bureau of Investigation, which investigated the case, said late on Monday that Gurmeet Ram Rahim Singh would serve two consecutive 10-year-terms for the two rape convictions.

Reuters and other media had earlier quoted government officials and lawyers as saying that the twin sentencing would run concurrently for 10 years.

Tens of thousands of police enforced a lockdown in large parts of the northern states of Haryana and Punjab where Singh, 50, has a mass following.

Police in Haryana issued orders to shoot protesters on sight ahead of the sentencing and ordered the hearing to be carried out inside the prison where Singh was being held.

Hundreds of followers went on the rampage when he was convicted on Friday, attacking train stations, buses and television vans.

At least 38 people were killed and more than 200 injured, triggering criticism that Prime Minister Narendra Modi’s ruling party, which also governs the state of Haryana, was either unable or unwilling to act against Singh’s followers.

The case dates back to 2002 when two women followers accused Singh of rape at the headquarters of his Dera Sacha Sauda organization in the town of Sirsa. Singh, also known as the guru of bling for the bejewelled costumes he wears in self-produced films, faced a minimum of seven years under new tough rape laws. 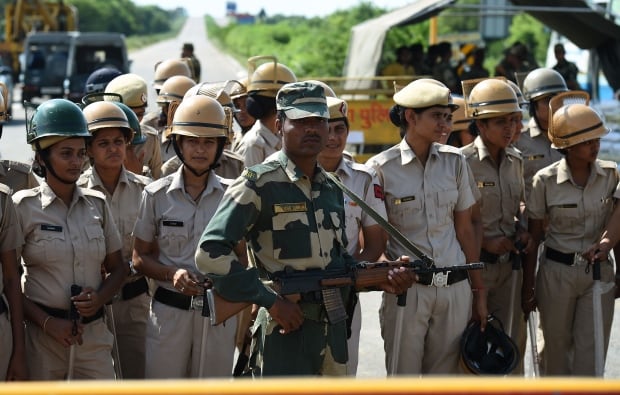 Indian security personnel stand guard outside Sonariya jail in Rohtak on Aug. 28, 2017. Police drew up blockades in hopes of containing violence and bloodshed that have led to the deaths of at least 38 since the widely followed guru was found guilty.

Singh’s lawyer, A.K. Panth, said his client was innocent and would appeal. Vipassana Insaan, a spokeswoman for the Dera Sacha Sauda, urged Singh’s followers to respect the court’s order.

“Our legal battle will not end here. Our client is absolutely innocent,” said Panth. Indian TV channels reported that Singh broke down after the sentence was passed and refused to move out of the court room, saying he was innocent.

The prison in the town of Rohtak, 66 kilometres from New Delhi, was transformed into a fortress, with journalists banned from approaching within 1.6 kilometres and roads were lined with barbed-wire barricades.

V. Umashankar, a special commissioner in Haryana, said a curfew was in force in the town of Sirsa and parts of Rohtak. Nirmaljit Singh Kalsi, an official in Punjab, said paramilitary forces were patrolling public places to maintain order.

“We will not withdraw forces today .. .the situation can easily go out of hand even now,” said Kalsi.

Singh’s conviction in a rape case is the latest in a series of cases involving spiritual leaders who have been accused of sexually abusing followers, amassing untaxed money and finding favour with politicians.

The case has highlighted the Indian heartland’s fascination with spiritual gurus, who enjoy immense influence for their ability to mobilize millions of followers.

Singh claims more than one million followers on his website.

In 2015, Singh started a film franchise portraying him as MSG or “Messenger of God,” performing miracles, preaching to thousands and beating up gangsters while singing and dancing.

Singh also faces charges of murder in two separate cases and is accused of castrating 400 men inside his ashram to help them get closer to God.