“This is a tragic situation,” said Winnipeg police spokesman Const. Rob Carver.Three people are dead from suspected fentanyl overdoses in a home in north Winnipeg.

Police say they were called to check on someone in the home on Petriw Bay, in the Inkster Gardens neighbourhood.  After seeing an unresponsive man inside, they forced their way in and discovered three bodies — the man and two women. They also found a white powder and drug paraphernalia.

Carver said the powder must be tested, but the suspicion is it’s fentanyl. 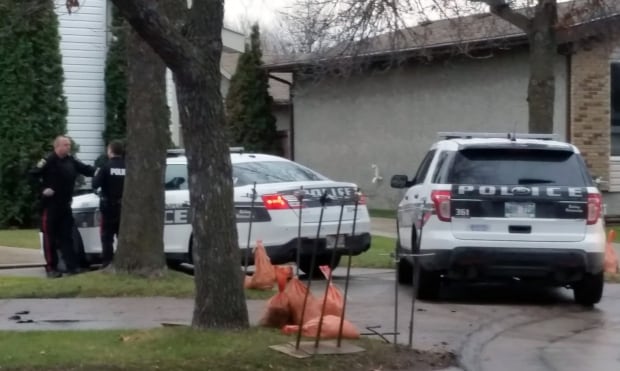 Two police vehicles remain parked at a home on Petriw Bay, in Winnipeg, Wednesday morning after the bodies of three people were found, along with a white powder and drug paraphernalia. (Meaghan Ketcheson/CBC)

“And we’re taking all of the precautions we are because of that suspicion,” he said, noting the police service’s clandestine lab unit was involved in the investigation.

“The drug is incredibly toxic. Almost invisible amounts would be enough to be toxic.”

However, he added, it will take weeks to get confirmation of what exactly the powder is, because the labs that do the testing are backed up with work from police forces across the country.

“We get in line and we wait for the results,” Carver said.

The three victims, all under 40, were the only people in the home, he noted, adding that it appears they died a while before police found them, “but I don’t know how long.”

A neighbour told CBC News he saw several police officers enter the home wearing protective masks over their mouths and noses. He said police told him “something bad happened inside.”